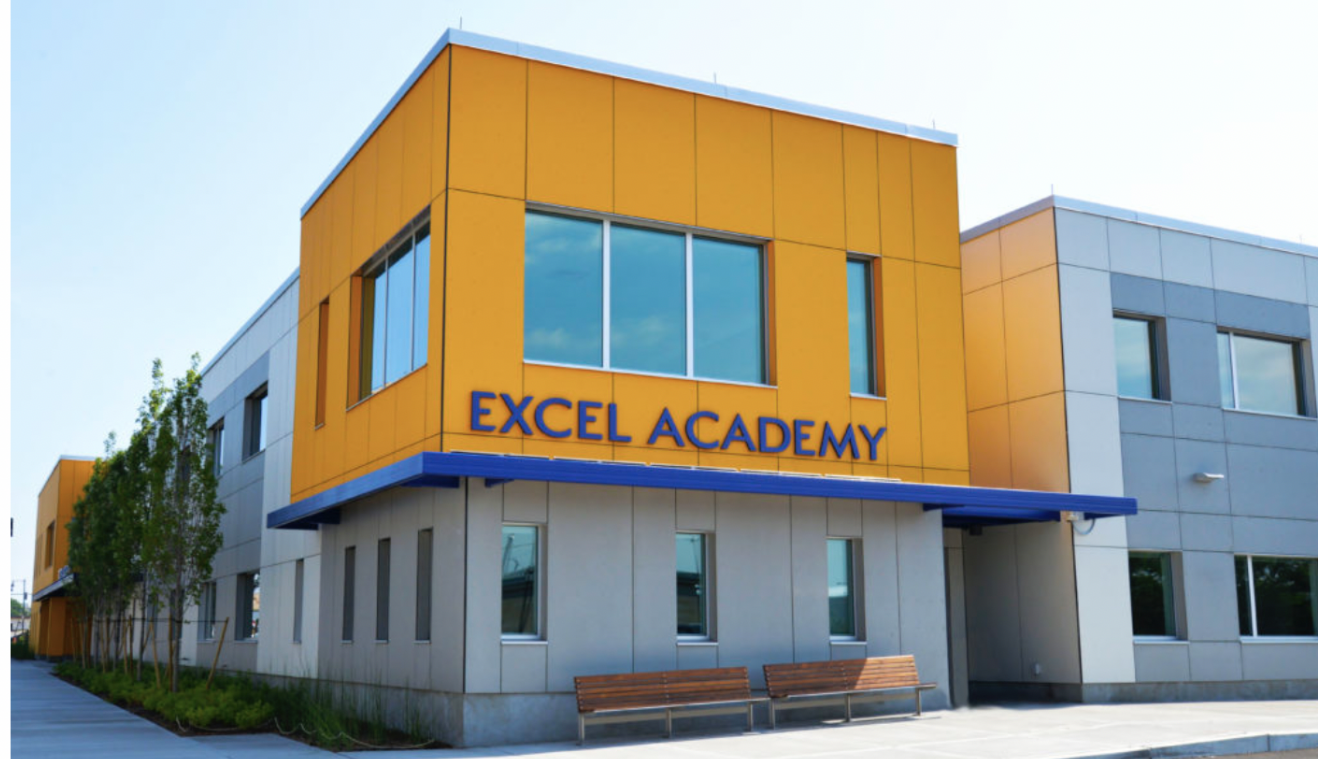 How does a high-achieving charter school network continue to deliver results, grow with quality, and meet its students’ needs over time? One answer lies with Excel Academy Charter High School in East Boston.

Since 2008, Excel – consistently one of the highest-performing charter school networks founded by a BES Fellow – has stood shoulders above the vast majority of public middle schools in Massachusetts. Every year, from 2008 to 2014, at least one grade level at Excel has ranked #1 for student academic performance, based on the percentage of students who scored Advanced or Proficient on the state’s MCAS exams. The school, which graduated its first class of high school seniors this past spring, credits some of its students’ continued growth and success to the implementation of a social and emotional learning (SEL) strategy.

Across the country, leaders, teachers, parents, and employers have become increasingly vocal about their experience with, and the benefits they’ve observed from, social emotional learning. In a survey of principals, 97 percent stated they believed an increased focus on SEL would improve their students’ academic achievement. Results from a CASEL survey revealed that most teachers have a clear understanding of what SEL is and they believe it is teachable, and nine of ten teachers would support a greater focus on SEL in schools.

Students tend to agree. Two-thirds of current high school students affirm that attending a school focused on SEL would support healthy relationships with teachers and peers, increase their academic learning and performance, and improve their preparation for opportunities post-graduation.

Today, over a decade of research in neuroscience, learning, and child development supports this focus, demonstrating that student learning occurs across multiple dimensions – all of which are inextricably linked. Strong schools ensure that SEL doesn’t exist in isolation, but is woven through every learning experience over the course of a school week, day, and year.

“Our College Access and Post-Secondary Success (CAPS) Team were the first ones to deeply realize why SEL was so important, as they were supporting our students after they left Excel and seeing too many of them struggle in college,” shares Owen Stearns, Chief Executive Officer of Excel Academy. “And most of the students who struggled did so because of social-emotional issues, not because they weren’t academically prepared.”

“I think a lot of the early wave of charter schools started deeply feeling this around the same time, and it’s really caused a fundamental re-think of a successful school model. High academic and behavioral expectations will always be important, but it’s also critical that students are given space to explore who they are, what they want out of life, and to develop skills around relating to other people. I’m thrilled that we’ve been leaning into this work more deeply over the past several years and eager to see where it goes,” Stearns continued.

For a first-hand perspective on SEL at Excel Academy, BES spent time with one of the school’s graduates, Hazie Crespo, who attended Excel in its founding years, is now a parent herself, and sends her son to Excel. Hazie is living out the school’s mission, having graduated from college and now working to solve relevant problems in her community – and she does this last part by now serving as Assistant Dean of Students at Excel High School. Hazie is also a current participant in the BES LENS program, which focuses on supporting leaders as they grow.

Hazie has been excited about Excel’s adoption of social emotional learning across its schools: “Social emotional learning is the process of being able to identify, manage, and feel empathy for others. Being able to have positive relationships and make responsible decisions based on what you need and set achievable goals that relate to where you’re at, academically but also mentally and socially.”

In an SEL-focused environment, Hazie and her colleagues have the tools to empower their high school students to figure out how to solve problems. “We value relationships a lot at Excel, with peers, staff members, community members, and families,” she explained. “So when students are in moments of really high stress or emotion and they’re unable to navigate it, we engage them in conversations about what they need, but also about how their behavior and reactions affect the people around them.”

In other words, SEL is more than just a program or lesson. It is about how teaching and learning happens, as well as what the school teaches. To do it well, a school must prepare its teachers to navigate situations using SEL-focused strategies.

“We do a lot of coaching with students, and with staff as well. Each teacher has a manager who coaches them through these different skills,” explains Hazie. “Managers discuss with teachers which students they’re having the most difficulty with, and why. And the manager coaches them on how to tap into the various resources and support departments at our school to help particular students.”

Most Excel students, like those attending many urban schools nationwide, are students of color and come from low-income families. Hazie says that it’s important to provide professional development opportunities and other resources for teachers to understand student experiences.

“Students are coming from areas that are high in poverty, violence, and trauma. We have to be very intentional about how we address those issues, allowing educators to visit other schools, do community service, and stay updated on current events in our community. What’s happening outside our school walls affects our students in positive and negative ways, and educators should see that first hand to get the whole picture. We’re still learning how to do that most effectively.”

Hazie emphasizes that it doesn’t matter what zip code you’re from; stress is always a part of students’ lives. However, “It’s more prevalent in communities like East Boston and Chelsea, where there is higher poverty. We can’t ignore that.”

One of the best examples of SEL in action is at Excel High School is a one-hour activity called Circle, adapted from a model introduced by Valor Collegiate Academies in Nashville, TN.

Each week during Circle, students participate in an emotional check-in as a group. Hazie explains: “They introduce themselves, they rate themselves emotionally, and sometimes we ask, What weather are you today? What emoji are you? And then we ask if they ‘have work to do.’ They might say yes – which means they’re going to participate in the Circle. Or no, they do not have work, meaning that they’re going to opt out of sharing today, but are still going to be present and support the students who do share.”

Hazie says that Circle helps students address their emotional pain points and barriers, such as identity issues and situations happening at home. “They don’t know how to express or have those types of conversations. Students feel like they’re alone in what they’re going through, and they don’t see how other students might be going through that as well,” she observed. “Similarly, they may not identify that staff members have experienced the same issues. And so implementing Circle really helps facilitate conversations around student identity, relationships, self-reflection, connections, and community-building.”

Circle is a now a major part of Excel’s SEL approach, but Excel had yet to implement activities like Circle when Hazie was in middle school there. When she was in school, “students were sometimes expected to leave mental and emotional issues at home,” she remembers. “And that’s hard to do as you’re navigating hormones, growing up, social pressures, and family conflicts.”

“I wish there had been a moment or a little bit of structure in place to talk about the more internalized struggles that I had at that age,” she revealed. “Not just, Why is this class hard? Why didn’t I get problem number six, but also, What does it mean to be a teen mom? What does it mean to be going to a private liberal arts college where I’m going to be faced with big culture shock?”

“Circle can be difficult for our students who struggle with how to identify and manage their emotions. Vulnerability can be really hard for them. So we’re also looking a­­t alternatives, keeping the same structure, but putting them into groups with people they feel most comfortable with, allowing them to choose who to be in the Circle with,” Hazie explains.

Like every other aspect of the academic program at Excel, SEL is a tool to prepare students for the future. We know that it can be a challenge for students to transition to and persist in college after attending a highly structured school. Hazie expects that her students will have a leg up on that transition. “Our goal is that, with the combination of support and autonomy we give them here, they learn how to identify their needs and manage themselves so they are ready to be successful in college.”

Hazie acknowledges that there’s still work to do. “SEL needs to be well-researched, equitable, thoughtful, and we need to have more experts who understand it,” she asserts. “It needs to be part of the educational process. And we need to include our students in the process – there are a lot of adults talking.”

Even with more to do, in Hazie’s experience, implementing SEL at Excel has meant benefits that are out-sized, and that keeps her motivated as an alumna, a mother, and an educator.

“Really, the reason I love Excel so much, and this has contributed to our success, is the intentionality behind everything we do. The intentionality in forming relationships between staff members, families, and the community has really allowed us to be successful,” she concluded. “The student culture is so strong, because students know they can have a voice, and we help them find their voice. There’s still a lot of room to grow, but we have such a strong team. I’m very, very optimistic. That’s why I’ve been a part of the Excel community for so many years.”

Click here to read more about how BES supports school leaders and their teams.