From Mississippi to the Middle East: The Global Impact of Ken Campbell’s Career 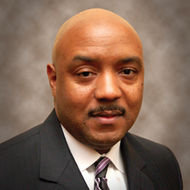 When Ken Campbell looks back on his early years, his most vivid memory is that of his mother walking him downtown – in rain, and sleet, and shine – to borrow Encyclopedia Brown books from the public library. Campbell grew up on the east side of Biloxi, Mississippi, in an environment where, in retrospect, all factors were stacked against him.

“I grew up poor, black, and on a street that bordered the projects,” he says. “But all credit to my mom: never at any point did I feel that.”

Campbell’s second strong influence came from his fourth grade teacher, who he remembers, to this day, as the best teacher he’s ever known. He still compares every educator he meets to her, he admits, and you hear a hint of pride in his voice when he says that she still remembers him decades later.

It wasn’t until the sixth grade, when his school started a magnet program, that Campbell first began to feel a little different. “I remember thinking, ‘How come I’m the only black kid here?’” His education, he believes, wasn’t bad; he just didn’t have an adult that really pushed him, or helped him lay out any kind of pathway for the future. His mother – who only had a fifth-grade education – checked out as Campbell got older.

“I remember talking to my counselor in high school and telling him I was thinking about going into the military,” Campbell recalls. “And he said, ‘that sounds great! Sign here.’ And that was that.”

It is this support, that was so lacking for him, that Campbell is hoping to bring to students in Louisiana, his home for almost a decade. As Executive Director of IDEA Public Schools for Baton Rouge, Campbell will open two campuses, each with two schools, in fall 2018. In this role, he needs to successfully apply for the charter, identify facilities, raise funds, hire staff, and develop relationships within the community. But through it all, Campbell is focused on one critical task.

“We have to get culture right in our schools from day one,” he says. “That’s what is keeping me up at night.”

The opportunity with IDEA was the perfect next step for Campbell, who previously served as the President for the Black Alliance for Educational Options. At BAEO, he would wake up every day thinking about changing the attitudes of Black Americans on issues like choice and education reform. During his travels, he met with a pre-DFER Shavar Jeffries, who was still working in Newark. That conversation – and Jeffries’ laserlike focus on Newark – left Campbell wondering what it would be like to be able to home in on one community and create effective, measurable change.

“Trying to impact people across the United States was great, but very, very hard,” he says. “That conversation got me thinking about what it would be like to focus on a population of kids.” When the opportunity at IDEA came along, everything came together.

“From Lafayette to New Orleans you have about a hundred thousand kids,” Campbell explains. “And that stretch is probably 135 miles. That’s a lot of need here in Louisiana. And I thought, ‘Can I make a difference in this part of the world that I love and know so well?’”

The desire to bring opportunity to areas of need has always driven Campbell, who was right there alongside Linda Brown at the beginning of the charter school movement. Back then, when policymakers were just realizing the potential of charter schools, Campbell was instrumental in getting DC’s landmark charter law passed. Soon after, he attended an information session on helping people start charter schools. One of the speakers, in particular, stood out to him.

“I honestly couldn’t tell you the name of a single other person who was there,” he says, chuckling. “Because Linda Brown may be small in stature, but she’s gigantic in presence.” Brown’s dynamism and passion for her work at the Charter School Resource Center in Massachusetts motivated Campbell to open a similar resource center in DC. A few years later, when Brown started Building Excellent Schools, she asked him to be on the founding board.

Since then, Campbell’s penchant for impact led him first to the Middle East, where he participated in progressive education reform by helping develop schools in Qatar, and then to Louisiana, where he led the rebuilding effort post Hurricane Katrina. His presence there accelerated the growth of Louisiana’s charter schools and established him as a game changer in the community.

Campbell is often asked to expound on his experience in the charter world, and to identify what made him successful. His answer is consistently the same: You have to identify what’s motivating you to do the work and ensure that the motivation is right.

“We have to do this work. But we have to do it and not make it about us,” he says. “We can’t be the hero of this story. Our kids have to be the heroes of this story. The biggest mistake leaders make is thinking that somehow they have to save the kids. Our kids don’t need a savior. They need someone who can help them make their dreams come true. They need to leave our schools believing they are the heroes of their own story.”

In 2007, Campbell stepped down from the BES board to avoid conflicts that could arise from BES Fellows going through the charter application process in Louisiana during his term as the charter school director at the Louisiana Department of Education. He rejoins BES at a time of change, with Brown transitioning within the organization. Campbell’s role, as he sees it, is to ensure that the organization’s founding principles remain in place.

“I think one of my roles is to protect the expectations and reputation that Linda has developed for the organization,” he says. “But also to lead us boldly into the future.”