From Policy to Practice: Achieving Excellence with Rebecca Cass 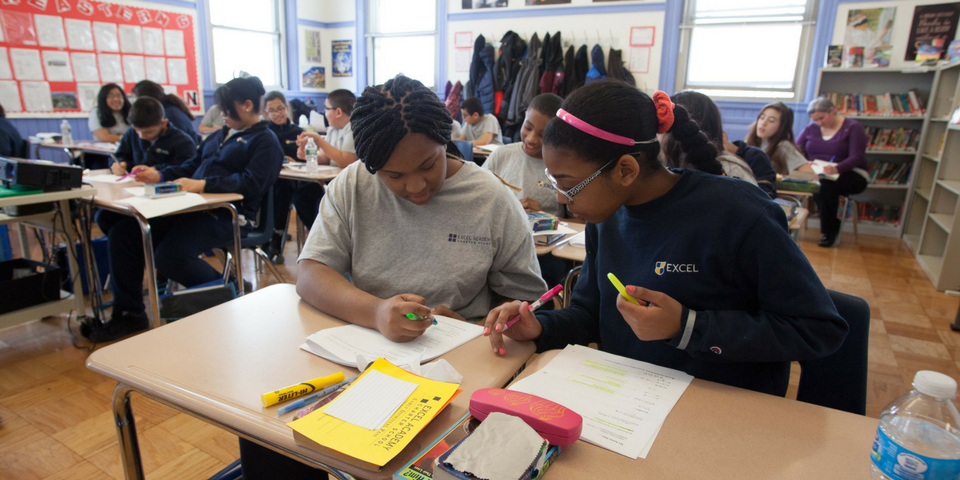 This blog post is the first of a series highlighting the accomplished members of the refreshed BES executive board. Today we shine the spotlight on charter policy guru, former Excel Academy titan, and longtime friend of BES Rebecca Cass.

Looking into the future and making an educated guess about the viability of a school is hard for any policy maker, let alone a green, 22-year-old recent college graduate. And yet that is precisely where Rebecca Cass found herself in the nineties: an employee of the Massachusetts Department of Education, making decisions that would affect the lives of thousands of Bay-State students.

As the offspring of two teachers, it’s not surprising that Rebecca came to focus on education as a public policy student at Syracuse University. After graduation she got a job at the Massachusetts Department of Education in the school finance office, where she helped with logistics: “moving money from A to B.” However, it was not long before Rebecca was introduced to something exciting brewing in a neighboring office: the charter school movement.

In the early to mid-nineties, states looking for solutions to improve the quality of urban schools were introduced to charter schools. The concept was immediately met with both apprehension and interest. Charters promised high student achievement and college-and-life-preparedness, but were new, largely untested, and, to some, “a nuisance;” a departure from the status quo that “didn’t quite fit the rules of how our relationship with public schools operated,” explains Rebecca.

Though it was the allure of school finance that had attracted Rebecca to the Department of Education, she felt the pull of the unique and innovative movement down the hall. Looking back on her career shift, Rebecca says, “What really drew me to the charter office itself was this young group of renegades who believed that this was a good thing for kids and were on the cutting edge of doing something differently and doing it really well.” Rebecca joined the team hoping to fix a broken system.

With the movement being so new and with “varying iterations of what charter schools should or should not be,” plans varied state to state. For some states, she explains, it was “let’s get as many of these schools open as possible and hopefully some will be good.” Massachusetts had a different approach, the perspective that, “We shouldn’t just be replacing bad schools with mediocre schools. Schools that are given the honor and privilege of serving children in this capacity should be excellent.” It wasn’t about making sure that schools opened; it was ensuring that the right schools opened.

Thus began a process of cultivating relationships with school leaders, poring over charter documents, poking holes in governance plans, and investigating schools to determine if they did in fact have the “solid, concrete plan for raising student achievement” that charter schools should. With standards strict and expectations high, Rebecca’s team carefully selected and supported new charter schools and their founding teams.

It was here that Rebecca met charter founders such as Yutaka Tamura of Excel Academy, and education-reform devotees such as BES’s own Linda Brown, then-director of the Massachusetts Charter School Resource Center.

When Rebecca left the Department of Education for consulting work, it was Linda who encouraged her not to forget about her contacts back in Massachusetts. It was also Linda who offered her office space, allowing Rebecca to avoid both a move to Chicago and working from her living room. “I actually squatted in an office at BES for several years, so I had the great pleasure of working at BES, though not for BES.”  Rebecca developed relationships with BES staff and Fellows, getting to know the likes of 2004 Fellows Lester Long, founder of  Classical Charter Schools, and Chris Gibbons, founder of STRIVE Preparatory, among others.

It was also Linda who encouraged Rebecca to re-connect with Excel Academy, one of the right schools that the Department of Education had approved to open when she was working there, and to eventually join their governance board in 2009. From there, things moved quickly: Yutaka Tamura, the school’s aforementioned founder, was leaving to pursue other things, and the school struggled to find a new leader. “It was really kind of a turning point for Excel,” says Rebecca, “… thanks to a lot of work by Sue [Walsh, also of BES] in particular, Excel had found itself as one of the most successful schools in the state and the country.” Rebecca admits to being “really concerned at the time with what was going to happen next,” as the search for new leadership proved nearly impossible.

With a lot of council from both Linda and Sue, Rebecca made the decision to take over as Excel Academy’s interim Executive Director. A school founder is a hard act to follow, but Rebecca spent a year and a half in charge, guiding Excel as the team readied to replicate and open a second campus in Chelsea. She helped select then 7th and 8th grade science teacher Stephanie Patton (former Senior Director of the BES Fellowship), deeply admired and respected by her colleagues, to lead the sister school. Rebecca then moved into a network role.

“When I look back at why I think Excel Academy was so successful out of the gate, it was because we got a lot of help from leaders who are all education reform powerhouses in their own right,” says Rebecca. “Excel was one of the first schools in the charter movement to really talk about systems, about the need for schools to run like a finely-tuned machine in order to create an optimal environment for learning.” But equally important for the school, she explains, was the humility of the team that came later. When faced with a school that was not what they had set out to run, the leadership team chose to put on the brakes and re-assess, something difficult to do. “It takes a lot of courage and a lot of hard work,” says Rebecca, both of which, she adds, are hallmarks of Excel.

Though Rebecca left Excel a little over a year ago, the charter school is never too far from her mind. She remains involved as their “biggest cheerleader, no matter where I am.” Looking back on her time there, she says: “I miss the energy you get when you are in a school building. Whether it’s being able to greet kids as you arrive in the morning and getting a handshake from them or overhearing an incredible lesson outside your doorway. There’s nothing better and it’s so hard to replicate the enthusiasm and energy that comes from being around bright kids who love learning.”

Rebecca also continues to support the work of aspiring charter school founders through her membership on the BES Board. Reflecting on her excitement to join the board, Rebecca says: “I believe so tremendously in the work that BES does. I’ve seen it directly through Excel and then indirectly through the range of BES schools operating around the country.”